BACK TO INTRO
click on any image to enlarge
6h55 - I'm in front of my apartment convincing myself to get on my bike ... it's the last day of the week just one more commute

and then the weekend. The sun is out, it will warm up the body in no time at all, once that is, you start pedaling.
Legs are slow to start, the pedals seem heavy and lethargic too, bike must not be happy to be out this early either. At least it's nice and quiet on the streets.

-----
-----
7h22 - Climbing up that steep incline on Weston Road. So early in my ride it is always a good test to see how my body is feeling. Seems a bit slow today, the last four days have taken its toll.

There's that bright yellow house I pass everyday. Can't miss it against the dour grey and brown homes that sandwich it.


----
----
7h41 - More climbing along Jane Street between Wilson and Sheppard Avenues. Traffic is heavy with frustrated drivers too

rushed and in a hurry to get this work day over with and start their weekend. Someone is honking non-stop. Not sure if it is aimed at me or the car behind me. I have no where to go but up. How I hate Friday commutes, the frantic tension in the drivers, I see more accidents along Jane on this day than any other day of the week. Now I am getting frustrated myself, I wish that guy would shut up.

7h52 - 20km into my commute. While crossing Steeles Avenue, and entering the city of Vaughn, a bus crawls past me on the left side, slow enough for me to catch a glimpse of a row of passengers butted against the window each holding a cup of coffee

... oh how I could go for a warm cup of coffee right now.
Can't stop just yet though I still have another 27km to go before I reach my destination. First I must get through Vaughn, a city very fond of low rise commercial plazas. Such a view is impetus enough for my legs to push on harder and faster.

8h28 - Just crossed Teston Road and the border between suburban sprawl and farmland. The houses no longer look

alike, they don't all fall within a prescribed grid formation. This is anarchy!

9h02 - Still cycling north on Jane Street through farmland. It has been very quiet for the last half hour or so. I have been on the road for over an hour and a half, covered 42km and it feels like I just left, time has shrunk,

my body no longer aches, it feels like it could keep going forever. And, why not just keep going north along Jane as far as my body can take me without stopping, how far could I get?
But, I have a job to do and must turn right in the next kilometre, I am almost there.

9h37 - Heading back on Keele Street passing ditches, trees and fences, beyond which are the farmhouses, the estates, the barns ... at least that is what I imagine to be tucked away behind all those trees that line this road. Every once and a while there is a clearing and I get a glimpse of a house or a barn or sometimes horses grazing. It is so quiet I only hear the odd bird, my head is wide open for thoughts. In such calm I only have to focus on one thing, moving my body forward and staying balanced on my bike. It leaves plenty of room for my mind to wander.

9h46 - King City, back in civilization. There are stores, gas stations, quaint homes and the odd café lining

the street. A bit more information for my eyes to take in. There is also more traffic on the road, more to think about and to focus on, closing in on my thoughts, my meandering. No more singing, or fashioning intricate plots to take down evil corporations and corrupt politicians, or just how to get

out of working for a living.

9h58 - Heading into Maple and Vaughn. From the overpass I can see the rooftops of all those cloned homes, all in perfect grid formation ... Legoland

10h09 Cycling south on Keele in Vaughn I speed through the intersection at Major MacKenzie Road only to stop to a dead halt. Traffic is at a standstill. Southbound lanes blocked off, mega road work being done. Fortunately for me a worker on site sees me. He clears a path and waves me through. I thank him and he replies by telling me that soon we will all have to ride bikes. I smile. That will be the day!

10h29 - Back within the city limits of Toronto, cycling through York University campus ... I can't help but find this area bleak, it lacks a soul. Or at least I haven't yet been able to locate one. Maybe I just haven't stopped long enough and penetrated deep enough into the concrete.

10h54 - Back on Keele Street cycling southbound over Hwy 401. One of the worst parts of my ride, the road is chopped up and there is always too many cars on the road heading in every direction. As most drivers are adverse to using their signals, I have to guess where they are going and maneuver myself accordingly. So far I have been lucky in this crapshoot.

11h01 - Finally off of Keele Street heading east on Lawrence Avenue. I have hit the last 10km mark, not very far to go now.

10h26 - Turn right onto Brock Street toward Queen Street where I will make a left and then a quick right on to Gwynne, then left on to Melbourne, right on to Dufferin and then, I will have made it - ground zero.

11h28 - ground zero. Finished my commute ... until Monday rolls around. 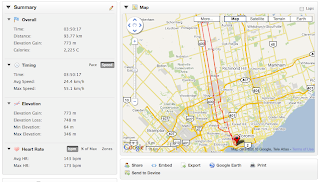