next stage
previous stage
It was a gorgeous day to leave Venice. Couldn’t locate the boat to Fusina – a campground and parking lot south of Mestre. Decided instead to ride the causeway and navigate through Mestre. Don’t try it! There is a sidewalk on the causeway, and after a bit of expressway like road you can locate a bike path north of Mestre, but getting all the way across the city is very difficult because of the main expressway bisecting the city E-W. The city is trying though, as the system of separated bike paths was the best I’ve seen anywhere so far. The espressway seems to be the insurmountable barrier. Eventually made it out to decent 2-lane road going south. We stopped for coffee in Campagna Lupia, in the lovely CafÈ Pieta. Great pastries and the owner gave us chocolate for the road. The rest of the ride went beautifully: Dolomites in the distance, flat as a pancake fertile plain all around. Several large religious cloisters in some of the villages. We modified the route along the way to avoid traffic and moved to small country roads through most of the day, adding about 10km to the day. Mestre was responsible for the rest of the increase. Distance: 195km (164 projected)
Arrived in Mantova feeling good after a fairly long first day (12 hours). Then the real fun started! The B&B Scam Here’s how it works: innocent tourist decides that to be on the safe side on a Friday, to book accommodation online. Visits hostel and B&B site for Italy cities… ah there’s a nice sounding B&B in Mantova. Books room with twin beds. Great. Then you try to find it… and it turns out to be non-locatable… cyclists ride around in the darkening city. Lights go on the bikes… Calls to the supposed B&B prove to give only vaguer and less likely directions. 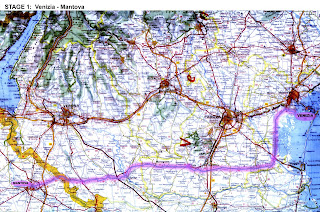 Then the travelers stumble on a strange, near-empty Albergo on the city limits… staff there seem to know something about the purported B&B, but their directions are even less likely… there is no ‘white house with lights on’. No sign, no lights, just darkened buildings, all empty or residential. The other Albergo offers a room at competing rates. Final calls to the supposed B&B prove that it doesn’t exist. In the end, we simply rode into downtown and found a beautiful, roomy hotel. It was so simple, and a buffet breakfast included at the 3-star Hotel Italia, Mantova. Excellent room rates. (hotelitaliamantova.com, 0376 322609)

Wow, this is a huge event! The camera angles, the movement, and the great audio really give the illusion of our own participation in the event. It’s interesting how no one takes notice of the camera.
Sorry to hear about the B&B scame, that’s awful! Glad everything worked out. Congrats!
Tania