10h09 Cycling past 1239 Weston Road, Chez la belle-africaine Café. Traffic so far has been relatively calm, although there are many parked cars along the street.I have to keep an eye out for those individuals exiting them.

10h34 and 18km into my commute. Cycling north on Jane Street near Finch Avenue ... It is not the most attractive part of the ride as it is peppered with high rise apartments and city housing complexes that could use some major upgrades.

10h53 Just north of Steeles Avenue and now in the City of Vaughn which prides itself as the "city above Toronto". At least that is what the sign says. For me it is the heartland of industrial parks and office plazas.
11h25

Approaching King Road the border line between the towns of Maple and King City. Just that much closer to work. I am now in farmland. Pass a few turkeys grazing in the front yard of a farmhouse. Then a little while later cows ... about twenty of them grazing and taking no notice whatsoever of my presence. Mind you it is fleeting. On this stretch of Jane, with little traffic or traffic lights, I am able to keep a steady speed of about 30km/h, it helps to have a tail wind.
A song enters my head, well, only a few notes that keep repeating over and over. Not sure exactly what it is or where it came from but my pedaling is keeping pace to it.

12h31 - Cycling south on Keele Street through King City and now entering the town of Maple, about 33km from home. I'm not too far from the Maple Downs Gulf and Country Club.
I have not yet re-entered the suburban neighbourhoods of Maple. My view is filled with greenery accentuated by splashes of red and orange. The sky is cloudy and the colours all the more saturated.

12h44 - In the middle of suburban sprawl. Pass a sign in front of the Maple Community Centre inviting me to sign up for the Vaughn Soccer Club. Don't they know I have never played it. Only team sport I played was Rugby during which I suffered my first bone fracture, two to be exact - my right ulna and radius. I was thirteen.

13h01 - Still on Keele Street crossing Doney Crescent. I'm back in the land of industrial parks. Reaching the border between the Cities of Vaughn and Toronto, only 2km away and about 19km from my home.
13h11 - cycling through the university campus, need to stop.

17h41 - back on the road toward home cycling south along Sentinal Road. Cycling through a quiet residential area situated just south of the university campus.

18h07 - Back on Keele Street cycling south past numerous high rise apartment complexes. Approaching Lawrence Avenue where I turn left, the point at which I know I have only 10km left to go.

18h30 - Cycling along Lansdowne Avenue, just south of Bloor Street with only 3km to go.

18h39 - Cutting through Milky Way, just around the corner from home. 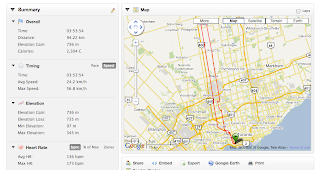