BACK TO INTRO
click on any image to enlarge

7h03 departure take my usual short cut through Milky Way. Feeling a bit of a chill. The air feels damp it might just rain today. Hope I can avoid it.

7h29 about 7km into my commute. Waiting for the light to change green at the intersection of Rogers and Old Weston Roads, next to the Nova Era Bakery. Where is that guy I saw Monday slouched against the building, maybe I am too early or he could be inside having a coffee.

7h41 about 11km into my commute. Traffic has picked up. Waiting at the intersection of Jane Street and Tretheway Drive. Well at least I'm not alone there are a number of people standing at the curb waiting for the light to turn green, looking just as bored as I feel.

8h01 at the 17.5km mark. Waiting at the corner of Jane and Finch Avenue, another red light. This one seems to take forever to change. It is a fairly large and busy intersection but then everything seems to get bigger and wider the farther I go from the centre of the city. I take a quick scan of the area it is amazing how many big high rise apartment complexes there are at this intersection. They are preceded by large parking lots attached to one storey, sprawling shopping plazas.

8h22 Still cycling north along Jane Street, past Rutherford Road. An hour and twenty minutes into my commute and 26km covered (16 of which has been on Jane Street). I'm in the city of Vaughn. There are no more high rise apartment complexes in my view just large cookie-cutter row housing running along the side of the road one block after another, interrupted by the odd shopping plaza. I never see anybody outside, coming or going, just rows of identical houses. I imagine each house having identical occupants.

8h37 32km done, still another 14km to go. Still on Jane Street heading north. In Maple now, surrounded by farmland with little if any traffic on the road. I keep a steady pace without worries of annoying drivers. There are so few intersections to wait at I'm no longer stopping every few minutes. My only worry the dark grey clouds slowly taking over the sky above me, I may not make it to work before the rain starts.

8h58 The rain has started and it is coming down quite hard. I stop to cover my camera with plastic. Although I am dressed for the rain I can really feel it in my legs. They feel stiff as I start pedaling again.

9h29 Cycling south on Keele Street, I'm now in King City. I have 43km to go. The roads are quiet as I pass the odd farm or private residence whose mansion is neatly hidden away from the street by rows of beautiful old trees.

9h38 I pass a wooden sign along Keele that advertises Ballroom Dance lessons. Here in the middle of nowhere?

9h42 I'm cycling downhill and take in the view. The autumn colours are so beautifully rich with the rain. Makes cycling in the rain almost worthwhile.

10h15 Now in Maple cycling along Keele, pass an empty baseball field. Actually there isn't a soul in sight.

All this open, flat land butted by rows of identical houses, void of humanity, it looks more like an odd landing strip with its converging lines grafted out of grass and paint . Seems more ready to accept some spaceship than a group of kids. Maybe that is what happened here, some spaceship chose to land here wiping out all of humanity within a few kilometer radius while leaving intact the rows and rows of identical houses. I realize my legs are feeling stiff from a sudden chill in the airl. I have to force them to pedal faster, I still have 29km to go.

10h41 I'm crossing Steeles Avenue, which borders the north end of the city of Toronto. 19km from home, at least

another hour to go.

11h26 cycling south on Caledonia Road. The street is narrow and the trucks that scream past me aren't instilling me with much confidence.


11h45 Only half a kilometre to go.At the corner of Queen and Lansdowne streets waiting for the light to turn green. 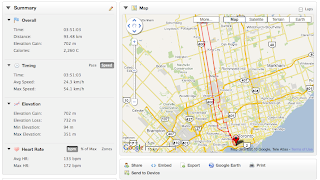