BACK to Intro
Friday 30 April 2010 - I've mapped out a route based on my research thus far and deciding to explore chronologically, the various neighbourhoods that make up Port Credit in the order that they became a part of this village. I start cycling on the west side of Credit River (where it meets Lake Ontario) in the oldest part of Port Credit. Just south of its first neighbourhood, founded in 1835. I document my route via GPS mapping and video recording (camera is affixed to the handlebars). Unfortunately, this first attempt was less than successful; the routing was a bit too confusing to follow while negotiating unfamiliar territory and lots of traffic. Will reconfigure my notes, and route, in a way that they can be easily followed while maneuvering small streets and the many turns and loops necessary to achieve my goal of physically mapping out the boundaries of each neighbourhood. 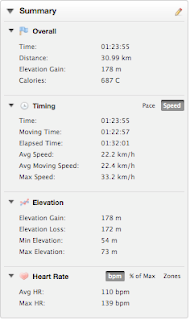 Here are some details from the day's ride: 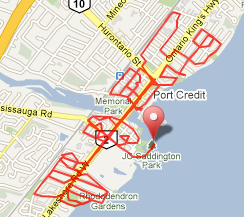 Video of my cycling meanderings.